Another Side of the “Arab Spring”

What Is to Be Done? 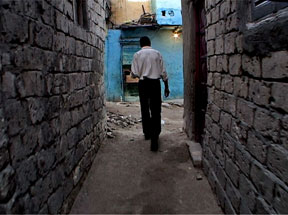 Mafrouza is a slum town in Alexandria, Egypt. The camera enters its narrow maze-like alleyways, inviting the viewer to experience the gentle flow of time there. An elderly man troubled by flooding in his home; young people who sing and dance in the streets at night; and the proprietor of a grocery who preaches at a mosque. We silently lend an ear to their views on life, passion, and relationships with the world outside, often with a cup of tea or cigarette in one hand. All evoke the joy of living. This film was screened at YIDFF 2011.

Born 1965 in London. In 1998, Emmanuelle Demoris directed a documentary film, Mémoires de pierre, about the past and the present of a stone quarry near Paris. In 1999 she spent a year traveling in the Mediterranean area to gather materials for a film. This journey led her to the Mafrouza film project in 2001. What Is to Be Done? is the third part of a five-part work.